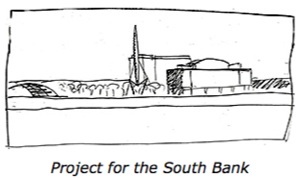 The practice was established by James Dunnett in 1983 and he continues to be the principal designer and to be closely involved in every stage of every project.

The aim in every project is to meet the client’s brief precisely while creating spaces that fully meet the objectives of ‘Light, Space, Greenery’ – spaces that are harmonious and a joy to experience and live in and around, while meeting their functional purpose. In residential projects the objective wherever possible is to optimize the relationship between house and garden.

James Dunnett studied architecture at Cambridge under Professor Sir Leslie Martin and sculpture at St Martin’s under Sir Anthony Caro, and subsequently worked for the celebrated architect Ernö Goldfinger RA, and for the Department of Architecture of the London Borough of Camden at a time when it was producing social housing recognized for its quality around the world. A number of buildings he worked on in both offices are now listed.

While having a profound love of historic architecture and a close interest in its conservation, he has never felt that this was sufficient by itself, because the quality of our future environment will inevitably depend largely on what we build now, how we meet our own needs. So the creation of new structures of quality has to go hand in hand with conservation of the best of the past. James Dunnett has as a result made a close study of the history and theory of the architecture and urbanism of the last hundred years – research reflected in the texts forming part of this website – to understand why we are where we are in architecture, to pick up on the best in it while identifying its shortcomings, and to move forward to new creation on the basis of understanding.

While most of James Dunnett’s built work has involved the alteration and extension of existing residential buildings, often listed or in conservation areas, he has also designed exhibitions, monuments, art galleries, school extensions, church alterations, a sports pavilion and new build houses. He has for ten years been Chairman or Co-Chairman of DOCOMOMO-UK, the UK branch of the international association for the Documentation and Conservation of buildings and sites of the Modern Movement, and has been involved with it since its inception in 1990. He has produced many proposals and reports relating to the conservation of listed Modern Movement buildings, and carried out work in this field.